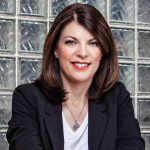 Amazon Charts and Wall Street Journal bestselling author Melinda Leigh is a fully recovered banker. A life-long lover of books, she started writing as a way to preserve her sanity while raising her kids. Over the next few years, she learned a few things about writing a book. The process was much more fun than analyzing financial statements, and she decided to turn her hobby into a career. Melinda’s debut novel, SHE CAN RUN, was nominated for Best First Novel by the International Thriller Writers. She is a RITA? Award Finalist and has earned three Daphne du Maurier Award nominations, Two Silver Falchion Awards, and Two Golden Leaf Awards.

Melinda holds a 2nd degree belt in Kenpo Karate. She’s dabbled in Arnis stick fighting, studied Brazilian Jiu-Jitsu, and taught women’s self-defense. She lives in a messy house in the suburbs with her husband, two kids, a couple of shelter dogs and two rescue cats who clearly run the show. With such a pleasant life, she has no explanation for the sometimes dark and disturbing nature of her imagination. Find out more about Melinda by visiting melindaleigh.com.